I’m excited to host the cover reveal for Meant to be Broken, a YA contemporary romance by southern belle by Brandy Woods!

Rayne Davidson is perfectly happy fading into the background. Her mama’s antics garner enough attention in their small Southern town for the both of them, but when Rayne catches the eye of all-star quarterback, Preston Howard, she’s enamored with the possibilities. Too bad Preston doesn’t make her heart thump—his brother does.

Gage Howard doesn’t mind the town’s stares because he doesn’t get them. Growing up in his older brother’s shadow, Gage shrugs off the endless parade of girls Preston brings home—until Rayne.

But there are unwritten rules that shouldn’t be broken, like cheating on your boyfriend or betraying your brother. Rayne and Gage deny their growing attraction, neither willing to hurt Preston—until the town finds out.

They think overcoming the gossip will be the hardest obstacle.

Rayne’s mama has a secret, and its revelation could divide the town, the families, and the new couple.

Can love endure if it’s all built on a lie?

Her secret is big. Mama’s is bigger

I love the yellow background of the cover which gives such warmth and is sure to stand out on a bookshelf. You can have this beauty in your hands on July 2, 2018.

The store manager calls me on my cell and asks me to come get her. He has my number because he’s Daddy’s best friend’s brother and used me to babysit his kids a few times last year. I answer, expecting another job offer.At 9:30 Saturday morning, I find out Preston Howard wants to date me. At 11:30, my mama hears it from old lady McAlister and has a “spell” in aisle three of the Piggly Wiggly. It’s taken seventeen years, but I finally understand the two things my social life and Mama have in common. They’re both erratic and one usually suffers because of the other.

“Rayne? This is Dave Sullivan, you know, the manager down at the Piggly Wiggly? There’s been an incident with your mama.”

Apparently it’d happened in front of the Luzianne tea bags. She was comparing the family size to smaller ones when Mrs. McAlister offered her a coupon… and a piece of news.

The details get a little sketchy from there—something about her sinking to the floor and gasping for air. That’s when the manager came over with one of those small brown paper sacks they use to bag up ice cream and had her breathe in it. A nurse and a vet, both in the crowd assembled around her, agreed from their varied medical expertise it didn’t appear to be life-threatening. When the paper bag seemed to work, he decided to call me instead of the ambulance.

I pull into the parking lot ten minutes later. She’s sitting on the front bench beside the automatic doors where the employees go to smoke, under the “I’m Big on the Pig!” sign. Mrs. McAlister sits beside her, a little too close, waving a folded-up circular in her face. I wonder what the store employees and shoppers think of me, casually parking the car, walking-not-running, and looking both ways before crossing the main traffic flow. It doesn’t take a genius to figure out they’re all watching from between the weekly specials scribbled on the plate-glass windows.

I don’t feel the need to rush. It isn’t a heart attack or stroke. I call it her bipolar though Daddy gets mad when I refer to it like that. The diagnosis is anxiety, better known as my evil little sister—always around, always a pain, and always ruining my life.

This sort of episode has happened before, just not too often in public. In most societies that’s considered good news—but not in the South. They say we don’t hide our crazy, we dress it up and parade it on the front porch. And even if we don’t, someone else will do the parading for us—telegraph, telephone, tell-a-southern woman. We know how to reach out and touch some people.

Mrs. McAlister jumps up from the bench and grabs my arm as I step up on the curb. “I suwannee, child. She liked to turned over her buggy and spilt them groceries everywhere.”

Talking to some of the older ladies in town always feels like walking out of real life and into some part of Steel Magnolias. She gives me her version of the sordid details. Mama created quite a scene, not just with her episode but also by her scandalous choice of groceries. The mayonnaise was the only casualty, rolling out the leg hole of the kiddie seat portion of the cart when Mama accidentally gave it a rough shove while collapsing on the linoleum.

Mrs. McAlister hadn’t bothered to pick that up and put it back in the buggy, which was now waiting by the customer service desk. It wasn’t Dukes Mayonnaise. She leans in close to whisper because how embarrassing would that be for Mama. To her, it’s further proof Mama hadn’t been feeling well long before their conversation. What southern woman in her right mind buys off-brand mayonnaise? 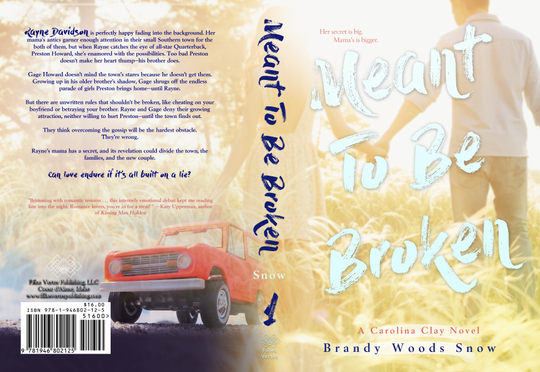 Brandy Woods Snow is an author and journalist born, raised and currently living in beautiful Upstate South Carolina. She earned a BA in English/Writing from Clemson University and worked in corporate communications and the media for more than 17 years before pursuing her true passion for novel writing. Brandy is a member of Romance Writers of America (RWA) and Young Adult RWA.

When Brandy’s not writing, reading, spending time with her husband or driving carpool for her three kids, she enjoys kayaking, family hikes, yelling “Go Tigers!” as loud as she can, playing the piano and taking “naked” Jeep Wrangler cruises on twisty, country roads.

Reviews of Meant to be Broken

“Brimming with romantic tension, Brandy Snow’s MEANT TO BE BROKEN is a story of forgiveness, friendship, and first love. Full of authentic southern voice and populated by characters who are real, relatable, and raw, this intensely emotional debut kept me reading late into the night. Romance lovers, you’re in for a treat!”

“Brandy Snow’s poetic prose keeps the reader turning the pages. This story is about more than just a love triangle. It is also a family drama with dark secrets and twists.

The story unfolds from both Rayne and Gage’s perspective. Growing up in his older brother’s shadow, Gage is almost oblivious to the girl’ s Preston brings home—until he meets Rayne. You want Rayne and Gage to get together, but you don’t at the same time because Preston is a good guy.

When Rayne and Gage finally get together secrets come to light that will surprise you!”

– R.J. Garcia, author of Nocturnal Meetings of the Misplaced