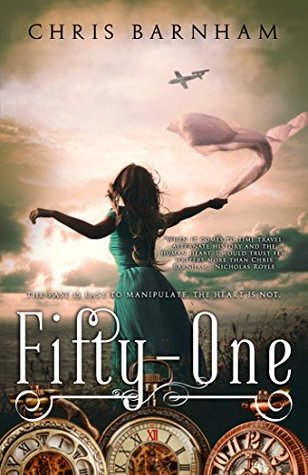 Jacob Wesson is a timecop from 2040, sent back to WWII London to stop the assassination of Britain’s war leader. The assignment plays out with apparent ease, but the jump home goes wrong, stranding Jake in war-ravaged 1944. Jake’s team, including his long-time girlfriend, is desperate to trace him before something else goes wrong.

Stuck in the past, Jake must pull from his training and blend in. He clings to the one familiar face he can find, Amy Jenkins, a war widow whose life he saved during the assignment. Drawn to each other by their loneliness and thrown together amid the terror of war, Jake and Amy look to a future together.

But Jake’s future cannot let him go. And when his bosses finally find him in 1944, Jake faces a terrible choice: risk unraveling the modern world, or let Amy die.

My biggest pet peeve with fiction is Deus ex machina and coincidences. I was frustrated many times while reading Fifty-One due to apparent coincidences in the plot, but in the end, it turns out they were not coincidences at all. (Wow!!) I usually can predict endings but not for this one, this one blew me away.

Barnham’s attention to detail is impressive and the little nuances through out the time travel plot are delightful. I enjoyed the historical aspects of war-torn London and the evident research that went into the writing.

This story is more a thought exercise than a romance – which I appreciated, though I do wish some key scenes would have been between Amy and Jake instead of through a different POV (I especially would have liked to have seen more of Amy’s reaction to 2040). But that is a small wish considering I couldn’t put down the last half of the book. And that ending…

Chris Barnham worked for two decades for the British government, advising Ministers on education and employment policies. In 2013, he decided it was time to make stuff up for himself. He now combines writing with running a small business, and active involvement in community politics in south London, where he has lived since the 1980s. His short fiction has appeared in a range of magazines, including Compelling Science Fiction, Black Static, the UK’s premier horror magazine, and the late-lamented Pan Books of Horror. His first novel, Among the Living, was published in 2012 (revised 2nd edition, 2017).

Chris lives in London, England, with three tall children and a scary wife. Whenever work allows, he spends as much time as possible out of town with mud on his boots. His latest walking challenge is the 630-mile South West Coast Path, around the Devon and Cornwall coasts. You can follow his (slow) progress on his blog.